Life in my shoes

On a recent set of on call shifts I met James,* who my team treated for pulmonary emboli. He was a lovely man; visits to check he was on enough oxygen to maintain his saturations and to assess his haemodynamic status were a joy, due to his easy manner and good humour.

One one occasion I was with my Consultant, who had known James for a while prior to this admission. At the end of the consultation he asked a very powerful question “is there anything else on your mind?” At this point I was closing the notes folder and putting my pen in my pocket, expecting to move on to the next patient. But James  did have something on his mind.

What I have not mentioned is that James is HIV positive. He has been living with HIV for many years and facing the challenges associated with this with resolve and good humour. His current problem was not directly related to his HIV status, but as is the usual practice whilst he was in hospital he was cared for by both the general medical team, and the “immune deficiency team” who were able to advise on potential interactions with his ARVs and give other specialist input.

One afternoon James was sat in his hospital bed, chatting to a visitor who was unaware of his HIV status. One of the immune deficiency team doctors had just been to see him and was writing up notes at a nearby desk. Another doctor called across the ward “hey, are you the HIV doctor?”

This question was clearly asked thoughtlessly, with a complete lack of awareness of the potential to breach a patient’s confidentiality. James told us that thankfully his visitor had not heard, but he was concerned that this situation could happen again to someone else. He offered to talk to the doctor involved, to explain the impact of a HIV diagnosis, and the significant anxieties felt by those affected, in particular around potential breaches of confidentiality and  discrimination within healthcare settings.

This conversation made me think about my own views on HIV, and I realised that I am incredibly naive. To me HIV is just another chronic disease; requiring early recognition, lifelong support, timely treatment, and awareness of associated morbidity and mortality. In my mind, it does not differ greatly from diabetes or COPD. Of course I am aware of the additional moral judgements that go along with sexually transmitted infections in general, and that the fear of contagion from ill-informed people coupled with value-judgements on lifestyle choices make living with HIV significantly different to living with diabetes, but I have not witnessed this myself. I watch films like Philadelphia and Angels in America, and listen to anecdotes from older Consultants, and feel completely disconnected from them: the AIDS epidemic of the 80s feels like a distant bygone age. Hasn’t society moved on? Isn’t my generation more liberal?

Giant leaps have been made in the last few decades in diagnosis, treatment and life expectancy, and my professional perception of HIV as “just another chronic disease” is in many ways a sign of success in overcoming the associated stigma. But meeting James provided a stark reminder that people living with HIV still face significant prejudice. As a throwaway comment he said “the curtains around the bedside aren’t exactly soundproof, and the visitors of the patient next door didn’t look particularly pleased when they overheard someone say ‘HIV’. I’d rather not have to deal with that while I’m struggling to breathe!”

HIV and AIDS gets less attention from the media in the UK than it did during the early years of the UK AIDS epidemic, but it’s far from an issue of the past. In fact, the epidemic has expanded, with the annual number of new HIV diagnoses nearly tripling between 1996 and 2005. Annual diagnoses have slightly declined since then with 6,150 people diagnosed HIV-positive in 2011. But despite rising numbers of people infected through sexual transmission, public knowledge of HIV and AIDS appears to have declined. Worryingly the UK HIV and AIDS statistics show that of the 91,500 people living with HIV in the UK at the end of 2010, approximately 24 percent were unaware of their infection. This is the result of multiple factors including a lack of physician awareness of indicator conditions, physician reluctance to test and patient fears and reluctance to get tested, in part due to myths, and negative societal attitudes.

AIDS 2012, an International AIDS Conference is being held in Washington this weekend. Part of the extensive programme includes the screening of a film made in Hackney, London by the charity Body and Soul, whose message is optimistic and inspirational: 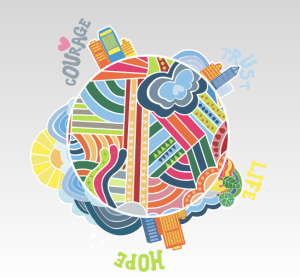 “We refuse to let HIV decide who we are.”

“We believe in people not victims; brilliant individuals, not scary statistics.”

“HIV can exert a powerful impact on the lives of people living with and closely affected by the virus. However…with the right interventions at the right time, resilience and hope can be developed.”

“There is one thing we all share, we are all different.”

One response to “Life in my shoes”