Health, wealth and the centenarian

Recently I treated and discharged a 101 year old gentleman. Back to his own home. And not a care package in sight.

As a hospital physician I rarely meet this group of older people, living full and independent lives. My view of the over 65s is coloured by my frequent encounters with the most unlucky ones; suffering from chronic disease, dementia, cancer and frailty.  But they exist, these sprightly centenarians and in increasing numbers. And even more common are older people with a lot to contribute to society, but in need of a little support in order to maximise their potential. Between now and 2050 the number of people aged 80 years will almost quadruple to 395 million. At that point, there will be more people over 65 than children under 14.  Our world is changing, but are we ready for this global silver revolution?

As a broad generalisation “western society,” does not value age, experience and wisdom. Our culture is obsessed with youth and a narrow definition of beauty which has no time for those perceived as “past their prime.” But in the last few weeks I seem to have read an abundance of good news stories about older people doing incredible things. On Saturday Live on BBC R4 I listened in awe and fascination to Mary Hobson who took a degree in Russian in her 60s and now, in her 80s is winning awards for her version of Pushkin.

Nicholas Crace, a fantastic 83 year old, found that he couldn’t continue to give blood after 70, but he could donate a kidney. So he became the oldest live altruistic kidney donor in the UK.  He was back to gardening and cycling a week later.  For even more inspiring older people see here and here.

Despite these great examples I fear that in general we dismiss and ignore older generations and that, as a result, we are losing out. As I contemplate entering the later decades myself I am worried I will not have the means to enjoy “active ageing,” defined by the WHO as mechanisms through which “people can realize their potential for physical, social, and mental well-being throughout the life course and to participate in society, while having adequate protection, security and care when needed.”

So what are the necessary conditions for longevity, and what defines a happy life? Many people have attempted to answer this question. There is some evidence that those who live long healthy lives have higher levels of glutathione reductase (although I have not found any convincing evidence of a cause and effect relationship). Other research has idenfified genes that seem to influence longevity in multiple generations, including FOXO3A, which also correlates with lower rates of cardiovascular disease and cancer. But of course these reductionist theories miss the complex interaction of the individual, their genes, their childhood, their health choices, their socioeconomic status, their employment, their personality and risk taking behaviour, their social interactions, their self esteem and response to stress.

For over 70 years Harvard researchers have been following 268 men through their lives starting as “well-adjusted Harvard sophomores.” Half of them are still alive and now in their 80s. The study has documented narratives of the participants lives, in addition to collating questionnaires, psychological tests and medical examinations. The primary researcher George Vaillant has concluded that key components of a happy life include close relationships, access to a good education and good physical health. Perhaps more interesting are conclusions such as “objectively good physical health was less important to successful aging than subjective good health. By this I mean it is all right to be ill as long as you do not feel sick,” and “learning to have fun and create things after retirement, and learning to gain younger friends as we lose older ones, add more enjoyment to life than retirement income.” Dr Vaillant heavily emphasises the importance of social support and relationships in healthy ageing, which should ring alarm bells when we consider the lack of any sense of community in so many peoples’ lives, and the social isolation which often occurs with ageing.

The Okinawa Centenarian study in Japan identified several factors that contribute to the population’s high number of centenarians including: a diet very heavy on soya products, as well as fish and vegetables, and low on alcohol, dairy products and meat; commitment to frequent low impact exercise such as tai chi and gardening; close, supportive social networks; and a positive attitude that embraces and celebrates age. This group of people spend, on average, 97% of their lives disability-free. What a contrast to the common perception of the frail, dependant UK nursing home resident, unable to perform the most basic functions for themselves.  Ageing is not something to fear, if we remove the physical dependence and cognitive decline that we perhaps mistakenly see as inevitable.

I will continue to marvel at and celebrate the healthy older people I come into contact with, and aim to integrate some of the advice from Harvard and Japan to maximise my own chances of active ageing. But I also hope that the current period of austerity, coinciding with almost daily revelations of the degree of  inequality in society, and the entrenched corruption of power at the top  is bringing about a gradual reawakening; a shift in our materialistic and individualistic society towards a more caring, human, community-focused future. In my utopian future, age and wisdom are valued above youth and beauty, the gap between rich and poor is a fraction of what it is today, human interactions are treasured more than material possessions, and we all eat soya. 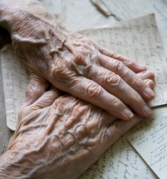 4 responses to “Health, wealth and the centenarian”